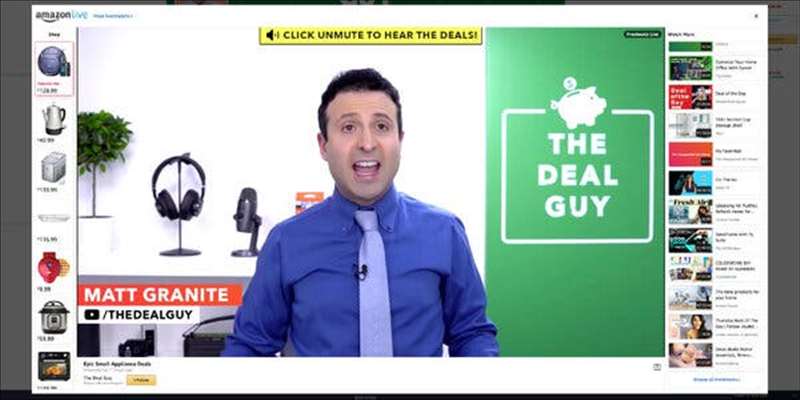 Amazon Live is a prominent example of how interactive video shopping, popularized by TV networks like QVC, has moved online.

Matt Granite had been working for years as a consumer journalist filming segments that were syndicated on American television stations and sharing additional videos on his YouTube channel, The Deal Guy.

In 2017, his style of homespun showmanship caught the attention of Amazon, and the company began flying him to New York every few months to record videos that would often run on its website around shopping events like back-to-school or Prime Day. He started experimenting with remote shows in 2019, so when the coronavirus pandemic hit he was somewhat ready to turn the basement of his home in Toronto into a studio.

“The only silver lining to the pandemic is that creators like myself were ready to connect to shoppers in their homes,” he said.

He now streams daily on Amazon Live, sometimes multiple times a day, covering everything from kitchen gadgets to snowblowers. Under each video is a carousel display of the products he’s discussing. When a viewer clicks that item and buys it, Mr. Granite gets a cut, with commissions varying from 10 percent for luxury and beauty products to 1 percent for Amazon Fresh items. While Mr. Granite’s YouTube channel still brings in more revenue through ad rolls and sponsorships, he said the revenue and audience numbers for his Amazon Live videos had grown over the past year.

Mr. Granite is part of another method that Amazon employs to allow customers to bypass actual stores: live, interactive video shopping, pioneered decades ago by the likes of Home Shopping Network and QVC and now increasingly common online.

This type of shopping, called e-commerce livestreaming, lets brand representatives, store owners, influencers — and really just about anyone — stand in front of a smartphone and start a conversation with viewers who tune in. Amazon Style Code Live began in 2016 with livestreams the company filmed with hired talent, covering beauty and style products. Amazon Live followed in 2017, covering a wider variety of products.

Starting in 2019, the number of livestreams increased as brands that sold on the platform were invited to broadcast through an app called Amazon Live Creator. Last July, those who were accepted into Amazon’s Influencer program also got access. Now dozens of streams can be live at any given time. They show people doing things like conducting workout classes, cooking demonstrations and makeup tutorials or just speaking to the camera.

“My personal goal is for Amazon Live to become a customer’s favorite way to shop,” Munira Rahemtulla, the director of Amazon Live, said in a statement. “It’s still early for us, and we have a lot to learn, but we’re excited to continue inventing on behalf of our creators and customers.”

“Everybody is thinking about this,” said Mark Yuan, a co-founder of And Luxe, a livestream e-commerce consultancy company in New York. “But they are rushing to it because of the pandemic. Before they had a choice. Now they have no choice.”

Mr. Yuan and Zoe Zhang started And Luxe to help bring Western brands to China but have recently seen an increase in inquiries from Western companies trying to get into e-commerce livestreaming. So far, Mr. Yuan said, no American company had quite mastered it. According to him, success entails more than just adding a video to the typical e-commerce experience. Instead what’s needed is a mix of content that isn’t tied to shopping but can attract new viewers, limited-time deals and even products exclusive to that livestream. That goes for all of the major tech companies trying to expand an audience.

“If they want to become an e-commerce livestream marketplace,” Mr. Yuan said, “they will have to change a lot.”

But the pandemic seems to be enticing more people to test out Amazon Live while they are stuck at home and looking for new ways to connect. Felicia Jones, an influencer in North Carolina focused on beauty and home décor, said Amazon reached out last year to ask her to join the Live program. She was getting out of the shower one day in November and planned to use a bunch of hair products she had gotten off Amazon when she decided to try out a stream for the first time. Figuring out the app took a few minutes, and she found herself talking to an audience that eventually reached 1,500 people. Now she tries to stream on Amazon regularly.

“If I don’t stream every day, I’m thinking about streaming every day,” Ms. Jones said.

According to the analytics Amazon sends her, Ms. Jones said, her livestream usually gets anywhere from 1,000 to 10,000 viewers, although concurrent viewers can top out in the hundreds. It’s successful enough that she has reached A-list, an internal status that gets her benefits like better video placement and more priority when it comes to support issues.

“It seems like every time you hop on,” she said, “it’s an opportunity.”

In 2021, the U.S. e-commerce livestreaming market could be worth up to $11 billion, up from about $6 billion in 2020, according to Coresight Research, a global advisory and research firm specializing in retail and technology.

The consumers are ready, but the retailers and tech issues are holding the industry back, said Deborah Weinswig, the founder and chief executive of Coresight Research. A company that sells the right products with interesting content and easy-to-use payment and inventory tools could still break through and might overtake the big tech companies, including Amazon, in livestreaming revenue.

“There is going to be a unicorn livestreaming e-commerce company,” Ms. Weinswig said.

One well-positioned competitor is Qurate Retail Group, the parent company of both QVC and Home Shopping Network, now HSN. It has branched out beyond broadcast and does livestreams on platforms like Facebook Live, Roku and YouTube TV. Although the platform may be different, the fundamentals of making a human connection haven’t changed, said Mike George, the chief executive of Qurate.

“For them, it’s about livestreaming as a service,” he said of tech companies like Amazon. “That’s great in the moment, but it doesn’t build relationships. We’re just having the same conversation in new ways.”