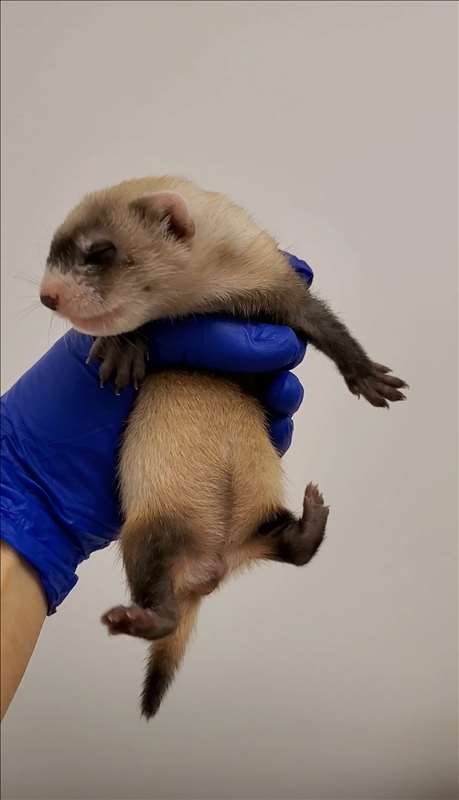 Her birth represents the first cloning of an endangered species native to North America, and may bring needed genetic diversity to the species.

Last year, Ben Novak drove across the country to spend New Year’s Eve with a black-footed ferret. Elizabeth Ann had just turned 21 days old — surely a milestone for any ferret but a particularly meaningful one for Elizabeth Ann, the first of any native, endangered animal species in North America to be cloned.

Mr. Novak spent less than 15 minutes with Elizabeth Ann, whose black mask, feet and tail were just beginning to show through her downy white fur. “It felt like time stopped,” Mr. Novak said.

Thankfully, time has not stopped for Elizabeth Ann, who now looks bigger, browner and considerably more like a ferret. Her successful cloning is the culmination of a yearslong collaboration with the U.S. Fish and Wildlife Service, Revive & Restore, the for-profit company ViaGen Pets & Equine, San Diego Zoo Global and the Association of Zoos and Aquariums.

Cloned siblings are on the way, and potential (cloned) mates are already being lined up. If successful, the project could bring needed genetic diversity to the endangered species. And it marks another promising advance in the wider effort to use cloning to retrieve an ever-growing number of species from the brink of extinction.

“Pinch me,” joked Oliver Ryder, the director of conservation genetics at San Diego Zoo Global, over a Zoom call. “The cells of this animal banked in 1988 have become an animal.”

In the early 1900s, black-footed ferrets burrowed throughout the American West, according to Pete Gober, the Fish and Wildlife Service’s national black-footed ferret recovery coordinator. But the ferrets vanished after their primary food source, prairie dogs, were nearly wiped out by poisoning, plague and habitat loss. “We thought they were gone,” Dr. Gober said.

The species was thought to be extinct in the wild until 1981, when a ranch dog named Shep dropped a dead black-footed ferret on a porch near Meeteetse, Wyo. The rancher’s wife took the dead ferret to a local taxidermist, who realized he was holding a freshly killed extinct species, and alerted the Wyoming Game and Fish Department.

The newly discovered population flourished for a few years but was nearly extinguished by canine distemper and sylvatic plague, a disease from the same bacterium that causes bubonic plague in humans. The Fish and Wildlife Service captured the remaining 18 ferrets, but only seven passed on their genes, leaving behind a population with limited genetic diversity that is vulnerable to pathogens or health disorders caused by inbreeding. All black-footed ferrets alive today are essentially half-siblings — except for Elizabeth Ann.

Dr. Ryder’s lab received more samples in 1988, one belonging to a ferret named Willa who was caught in the wild. Willa had offspring but they had died; by black-footed ferret standards, she was brimming with potential genetic diversity. The Frozen Zoo established a cell culture from Willa and stored it in their enormous freezer, which cradles the cells of 1,100 different species of animals including an extinct Hawaiian honeycreeper and the highly endangered vaquita, a porpoise species, at minus 320 degrees Fahrenheit.

First there was Balboa, who was born by means of artificial insemination using cryopreserved, genetically diverse sperm. Second was Cheerio, who was born naturally and shares ancestry from all seven founders; Novak calls him an “every ferret.” The last two ferrets came from tissue samples at the Frozen Zoo, one male called “Studbook Number 2” and one female named Willa. “When we looked at Balboa, we saw from an empirical standpoint that a great deal of genetic diversity had been rescued by reaching back into the past,” Mr. Novak said.

The surrogate was shipped to the conservation center and was watched 24 hours a day for signs of labor. On Dec. 10, Elizabeth Ann was delivered via C-section. “Our beautiful little clone,” Mr. Novak said.

On Elizabeth Ann’s 65th day of life the technicians drew her blood, swabbed her cheek and sent the samples to Samantha Wisely, a conservation geneticist at the University of Florida, who confirmed that Elizabeth Ann was, in fact, a black-footed ferret.

Elizabeth Ann will live out her days at the conservation center, soon to be joined by sisters (other clones of Willa) and potential mates (clones of Studbook Number 2). Researchers will monitor their health and watch them grow and scamper in the artificial burrows inside their cages, Dr. Gober said. When the clones reach sexual maturity, they will breed, and then their offspring will be bred back with wild black-footed ferrets to ensure there is no mitochondrial DNA left over from the surrogate mother.

“It will be a slow, methodical process,” said Dr. Wisely, who is working on a paper on the bioethics of cloning the species. “We need to make absolutely sure that we’re not endangering the genetic lineage of black-footed ferrets by introducing this individual.”

In the Frozen Zoo, the cells of long-dead creatures await their moment to come back to life, in a way. “If the technologies are developed in the future but nobody has saved any cells, that would be an opportunity that’s lost,” Dr. Ryder said. “The time to save these cells is now.” Dr. Ryder’s lab has already regrown and refrozen more of Willa’s cells, replacing the ones that became Elizabeth Ann.