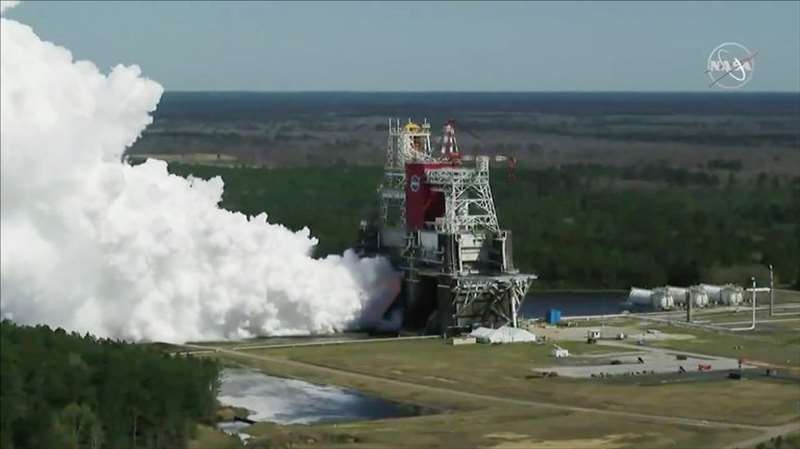 The Artemis programme aims to put the first woman and next man on the moon but, despite the test’s success, the date is in doubt.

NASA has completed a major test on a rocket that could take humans back to the moon.

The four main engines of the rocket’s core stage were ignited for eight minutes and 19 seconds on Thursday at NASA’s Stennis Space Centre in Mississippi.

The last test in January ended after about a minute – far short of the four minutes engineers needed to gather enough data.

On Thursday, NASA scientists could be heard applauding on the agency’s livestream as the RS-25 engines fired up, simulating a launch while the rocket was anchored to a tower at the space centre.

The test saw the engines move in specific patterns, directing thrust and reaching 109% power, throttling down and up again as they will during flight.

The surrounding area was filled with clouds of white smoke.

NASA’s acting administrator Steve Jurczyk said: “The SLS (Space Launch System) is the most powerful rocket NASA has ever built, and during today’s test the core stage of the rocket generated more than 1.6 million pounds of thrust within seven seconds.

“The SLS is an incredible feat of engineering and the only rocket capable of powering America’s next-generation missions that will place the first woman and the next man on the moon.

“Today’s successful hot fire test of the core stage for the SLS is an important milestone in NASA’s goal to return humans to the lunar surface – and beyond.”

Officials in the Biden White House have not said whether the first launch will be delayed until next year, nor have they issued a revised timetable.

For now, the SLS’s next step is to be refurbished and then taken to NASA’s Kennedy Space Centre in Florida.

This is where it will be integrated with Lockheed Martin Corp’s Orion spacecraft on the mobile launcher in preparation for Artemis I – the uncrewed flight.