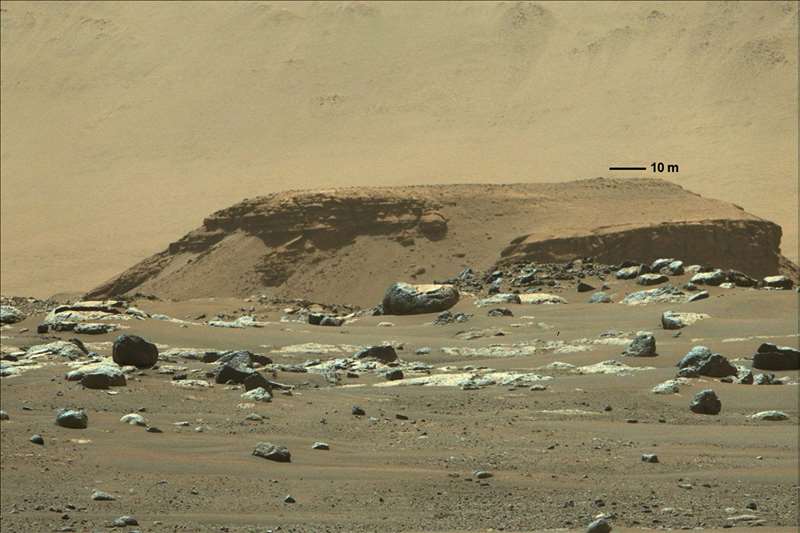 A new study from NASA’s Jet Propulsion Laboratory and researchers at the California Institute of Technology questions whether or not a longheld theory about Mars still holds water.

In their research, the team of scientists posits that a large quantity of the Martian planet’s water had not escaped into space due to its low gravity as previously assumed, but instead was trapped in its crust.

While it is known that abundant water had flown on the planet billions of years ago, the team said that their findings revealed between 30 to 99% of it had been stuck in minerals.

The data pertained to meteorite lab work as well as NASA Mars Exploration Program missions and the team focused on the quantity of water on Mars over time and the chemical composition of the planet’s current atmosphere.

“While water is made up of hydrogen and oxygen, not all hydrogen atoms are created equal. The vast majority of hydrogen atoms have just one proton within the atomic nucleus, while a tiny fraction (about 0.02%) exists as deuterium, or so-called ‘heavy’ hydrogen, which has a proton and a neutron. The lighter-weight hydrogen escapes the planet’s gravity into space much easier than its denser counterpart,” the release explained. “Because of this, the loss of a planet’s water via the upper atmosphere would leave a revealing sign on the ratio of deuterium to hydrogen in the planet’s atmosphere: There would be a very large amount of deuterium left behind.”

In addition, because Mars has no tectonic plates, it cannot recycle water into the atmosphere through volcanism like on Earth, making any “drying” at the surface permanent.

“The hydrated materials on our own planet are being continually recycled through plate tectonics,” said NASA Mars Exploration Program lead scientist at NASA’s headquarters Michael Meyer. “Because we have measurements from multiple spacecraft, we can see that Mars doesn’t recycle, and so water is now locked up in the crust or been lost to space.”

A key objective of the rover is to attempt to find signs of ancient microbial life during its mission by collecting and caching both rock and sediment.

Meyer, who is part of the Mars Sample Return Program, told Fox News on Wednesday that they look forward to the continual analysis of their “intriguing results.”

“The history of water on Mars and its relation to the astrobiological search for habitability and life is one of the biggest questions we continue to study with our missions at the Red Planet,” he said. “This is ultimately why we hope to collect pristine samples of the Red Planet with the Mars Perseverance rover and safely bring them back to Earth for scientific study through the Mars Sample Return campaign.”