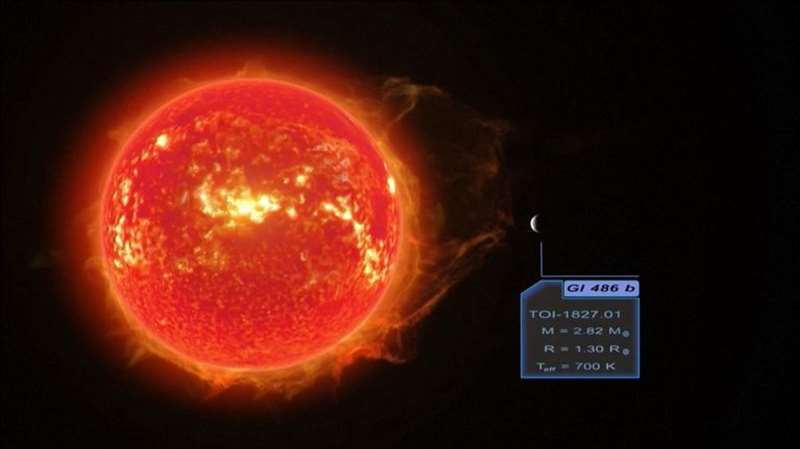 Gliese 486 b will be studied by scientists as they scour the cosmos for signs of life on other planets with telescopes.

A “super-Earth” located just 26 light years away could hold the key to finding extraterrestrial life.

At 430C (806F) and bathed in radiation, there is unlikely to be life nestled between the rivers of lava which are thought to burn across Gliese 486 b’s surface.

But – like Earth – the planet is made of rock and thought to have a metallic core.

“We say that Gliese 486 b will instantaneously become the Rosetta Stone of exoplanetology – at least for Earth-like planets,” said astrophysicist and study co-author Jose Caballero of Centro de Astrobiologia in Spain, referring to the ancient stone slab that helped experts decipher Egyptian hieroglyphs.

The chemical composition of the atmosphere of Gliese 486 b could provide a contrast point for scientists to compare other planets to – any oxygen, carbon dioxide or methane would be notable, as those are present in our own life-supporting bubble.

“All that we learn with the atmosphere of Gliese 486 b and other Earth-like planets will be applied, within a few decades, to the detection of biomarkers or biosignatures: spectral features on the atmospheres of exoplanets that can only be ascribed to extraterrestrial life,” Caballero added.

A “super-Earth” is a planet heavier than our home planet, but smaller than the likes of Uranus and Neptune.

Telescopes on and in orbit of Earth will be pointed at Gliese 486 b so more information about it can be gathered.

More than 4,300 exoplanets – planets outside of our solar system – have been discovered.

Planetary scientist Trifon Trifonov of the Max Planck Institute for Astronomy in Germany, is the lead author of the research published in the journal Science.

He said: “Gliese 486 b cannot be habitable, at least not the way we know it here on Earth.”

The planet orbits very closely to its red dwarf star, leaving it bathed in radiation. Its larger-than-Earth mass also means gravity on the planet will be about 70% greater than here.