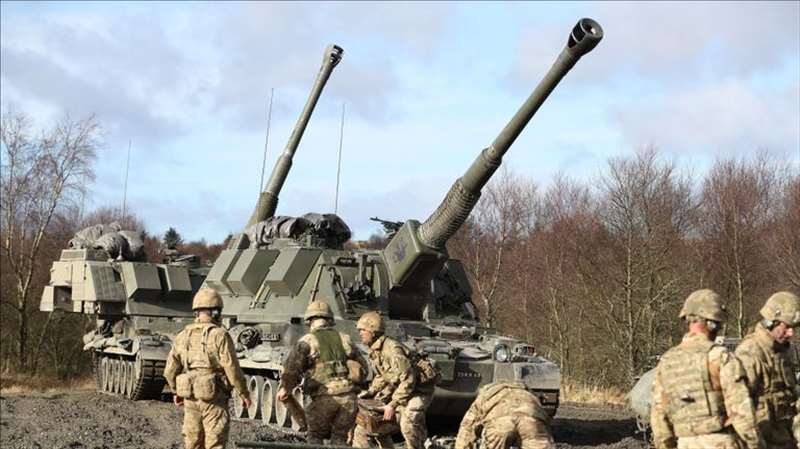 In a sign of potential clashes ahead, a senior Conservative warns that we “drop our guard on the conventional side at our peril”.

Boris Johnson has said new efforts to radically boost the UK’s cyber capabilities will “transform our ability to protect our people”.

The impact of the new technology will be comparable to the emergence of military air power a century ago, the prime minister said.

His comments come ahead of next week’s publication of the government’s long-awaited Integrated Review – billed as the most significant strategic overhaul of the UK’s foreign, defence, security and aid policy since the Cold War.

But in a sign of the likely political clashes ahead, the Conservative chair of the Defence Select Committee, Tobias Ellwood, has warned ministers not to overlook the need to bolster existing military capabilities, telling Sky News: “We drop our guard on the conventional side at our peril.”

It comes as a report by the Defence Select Committee has criticised the UK army’s ageing tanks and armoured vehicles, saying they could leave the UK “outgunned and overmatched” in a conflict with Russian forces.

The group of MPs said a series of procurement failures meant the army had been left with an armoured fighting vehicle (AFV) fleet facing “mass obsolescence”.

They blamed a history of “bureaucratic procrastination, military indecision, financial mismanagement and general ineptitude” which they said had marked attempts to re-equip the army over the past two decades.

As part of the launch of the Integrated Review on Tuesday, Mr Johnson will confirm the headquarters of the new National Cyber Force will be based in the north of England, with the aim of creating a “cyber corridor” in the region that will encourage the growth of the technology sector outside of London.

“Cyber power is revolutionising the way we live our lives and fight our wars, just as air power did 100 years ago,” the prime minister said.

“We need to build up our cyber capability so we can grasp the opportunities it presents while ensuring those who seek to use its powers to attack us and our way of life are thwarted at every turn.”

Mr Johnson added: “Our new, full-spectrum approach to cyber will transform our ability to protect our people, promote our interests around the world and make the lives of British people better every day.”

Writing in The Times, he said: “It will preserve the best aspects of the old while shaping the emergence of a new order, and defence and the armed forces have a critical role to play.”

“I fear there has been too much of a lure towards the digital domain, towards cyber security and the space command and so forth, but we drop our guard on the conventional side at our peril, and yet that is exactly what I see this integrated review taking us to,” he told Sky News.

“Our reliance on the internet and on data means we are ever more vulnerable to cyber attacks, data theft, interference in our elections, disinformation campaigns – that’s all a part of the parcel of the constant competition that we now face, but those old conventional threats have not disappeared.”

“It’s a bit like saying, fine, I’ve managed to get my computer with all the software on it, I’m completely protected, but I forgot to lock the front door.”