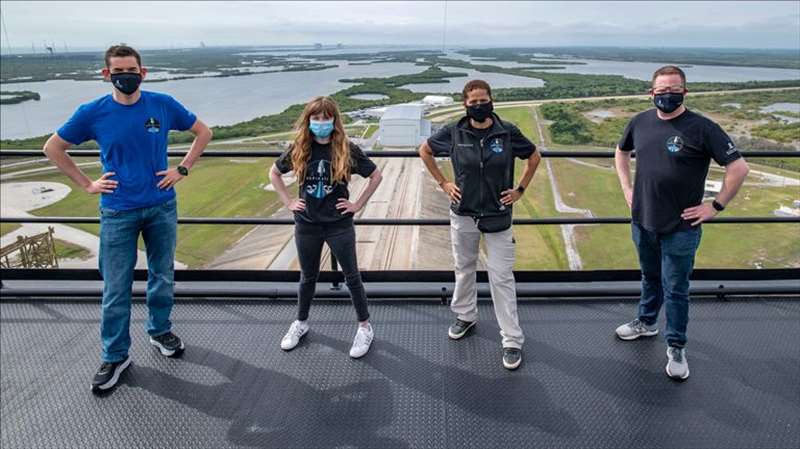 One lucky ticket winner says: “It was like when Harry Potter found out he was a wizard -a little bit of shock and awe.”

The last two multimillion dollar spots on the three-day SpaceX flight into orbit have been filled by a science teacher and a data engineer.

The SpaceX Dragon capsule is scheduled to launch in mid-September to an altitude of 335 miles – 75 miles higher than the International Space Station and on a level with the Hubble Space Telescope.

And Sian Proctor, a community college teacher in Arizona, and former Air Forceman Chris Sembroski, from Washington, will be on board.

Mr Sembroski’s college friend originally won the spot but gave him the prize.

Billionaire Jared Isaacman is sponsoring the flight, which he is calling his Inspiration4 mission.

He is head of Shift4 Payments, a credit card-processing company in Pennsylvania, and is paying for what would be SpaceX’s first private flight while raising money for St Jude Children’s Research Hospital in Memphis.

Mr Isaacman, 38, a pilot who will serve as spacecraft commander, will not say how much he’s paying. He is donating $100m (£73m) to St Jude, while donors so far have contributed $13m (£9.5m), primarily through the lottery that offered a chance to fly in space.

Hayley Arceneaux, 29, was named as one of the first crew members last month. The St Jude doctor’s assistant was treated at the hospital as a child for bone cancer.

Ms Proctor, 51, beat 200 businesses for a seat reserved for a customer of Mr Isaacman’s company.

Her space art website called Space2inspire was chosen for the golden ticket by an independent panel of judges.

She said: “It was like when Harry Potter found out he was a wizard, a little bit of shock and awe.”

Mr Sembroski, 41, donated and entered the lottery but was not picked in the random drawing earlier this month – his friend was.

His pal declined to fly for personal reasons and offered the spot to Mr Sembroski, who worked as a Space Camp counsellor during college and volunteered for space advocacy groups.

“Just finding out that I’m going to space was an incredible, strange, surreal event,” he said.

She was born in Guam, where her late father worked at NASA’s tracking station during the Apollo missions.

She plans to teach from space and create art up there too.

“To me, everything that I’ve done… has brought me to this moment.”