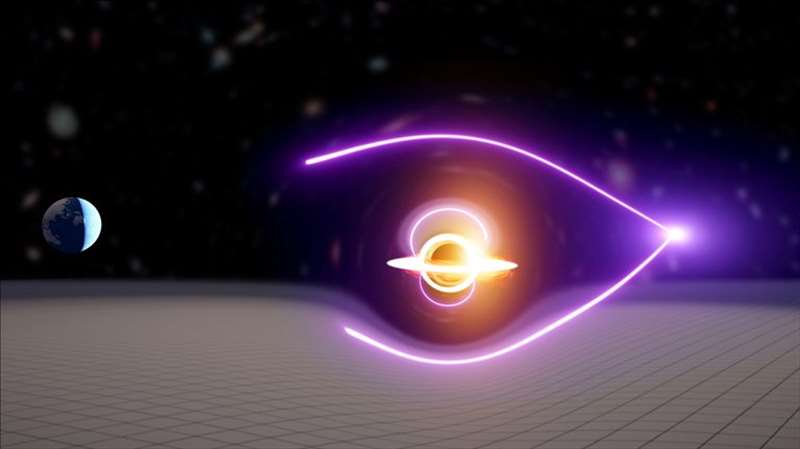 Researchers found the black hole through the detection of a gravitationally lensed gamma-ray burst.

A newly discovered black hole could be an ancient relic created before the first stars and galaxies formed, scientists say.

Approximately 55,000 times the mass of the sun, researchers say this black hole may be the “seed” of the supermassive black holes which exist today – and could help scientists estimate the total number of these objects in the universe.

The discovery of the “intermediate-mass” or “Goldilocks” black hole – different to the small black holes made from stars and the supermassive giants in the core of most galaxies – is published in the journal Nature Astronomy.

Researchers estimate that there are some 46,000 intermediate-mass black holes in the vicinity of the Milky Way galaxy.

Through the detection of a gravitationally lensed gamma-ray burst, researchers from the University of Melbourne and Monash University discovered the new black hole.

The burst – a half-second flash of high-energy light emitted by a pair of merging stars – had an “echo”, caused by the intermediate-mass black hole, which bent the path of the light on its way to Earth so that astronomers saw the same flash twice.

Software developed to detect black holes from gravitational waves was adapted to show that the two flashes were images of the same object.

Study co-author, Professor Eric Thrane, from Monash University, said: “This newly discovered black hole could be an ancient relic – a primordial black hole – created in the early universe before the first stars and galaxies formed.

“These early black holes may be the seeds of the supermassive black holes that live in the hearts of galaxies today.”

Fellow paper co-author Professor Rachel Webster, from the University of Melbourne, described the findings as “exciting”.

She said: “Using this new black hole candidate, we can estimate the total number of these objects in the universe.

“We predicted that this might be possible 30 years ago, and it is exciting to have discovered a strong example.”

He said: “While we know that these supermassive black holes lurk in the cores of most, if not all galaxies, we don’t understand how these behemoths are able to grow so large within the age of the universe.”