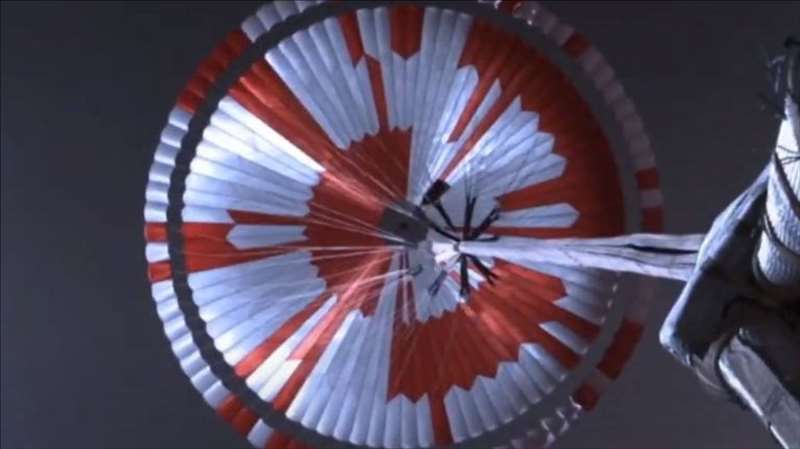 Space enthusiasts claim they have decoded a hidden message on the British-made parachute that helped NASA’s Perseverance rover to land safely on Mars.

Twitter and Reddit users have said the phrase “dare mighty things” was written on the parachute using a pattern representing binary computer code.

The phrase dates back to a speech made by the former US president Theodore Roosevelt in 1899.

Former NASA intern Emily Calandrelli explained how the message was revealed after it was decoded by fellow Twitter user Abela Paf.

Ms Calandrelli, who hosts science shows on Fox and Netflix, pointed to the parachute’s pattern as she said: “So if you look at the parachute there’s many of these – we’ll call them columns that go towards the centre.

“There’s also four main rings with different patterns. Consider a red location a 1 and a white location a 0.

“Ring by ring, put those numbers in groups of 10 and consider it a 10-bit pattern. What that means is each position, starting with the far right is an exponent of 2.

“For the inner three rings, those numbers map to letters and that spells out ‘dare mighty things’.”

Ms Calandrelli goes on to say that “dare mighty things” is a popular slogan at NASA’s Jet Propulsion Laboratory where mission control is based.

Another Twitter user wrote: “Looks like ‘dare mighty things’ is the parachute code from the @NASAJPL perseverance rover.

“The phrase is on signs all around JPL (e.g. the EDL War Room).”

The parachute was made by Devon-based Heathcoat Fabrics in the southwest of England.

The pattern on the outer-edge of the parachute is reported to represent 34°11’58” N 118°10’31” W – with the numbers giving the geolocation code for the Jet Propulsion Laboratory in Pasadena, California.

The pattern reportedly allows mission control to see what angle the parachute was deployed at and whether it got twisted.