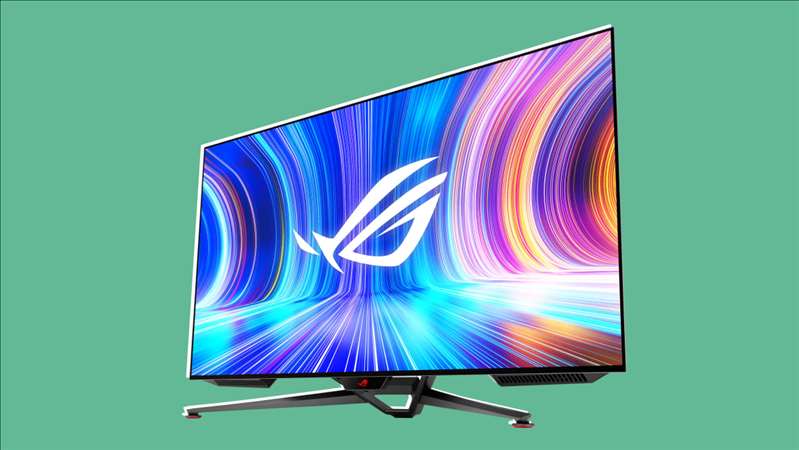 Tricky to work around even on a big desk

While the monitor is far from perfect, and faces the same fuss that has plagued OLED displays for years, it can still shine bright and deliver heaps of color that go a long way toward making a quality gaming and entertainment experience. At $1,400, it’s a big ask for a gaming monitor, but it’s a strong option if you want a display that pairs visual quality with substantial size.

Space scenes especially benefit, with the pitch black of infinite space deliciously rendered next to the glare of stars and sunlight reflecting off spaceship hulls.

The contrast of the ROG Swift OLED PG42UQ pairs with a wide color gamut that doesn’t make for a dull moment when enjoying movies, TV, or games.

As a gaming monitor, the ROG Swift OLED PG42UQ has to be fast, and it delivers. It can push its 4K resolution at a 138Hz refresh rate once it’s overclocked, which is a simple process in the menus. For fast action, refresh rate is only half the battle.

Pixel response time is a huge factor, and it’s one that OLED panels excel at. As soon as a pixel needs to start displaying a new visual, they’ll switch to exactly that visual near-instantly. IPS panels tend to be a bit slower, and VA panels are slower still. The result of that slowness is visuals that smear during fast movements. So even if the panel is refreshing at 240Hz or even 360Hz, it can be a blurry mess during fast action that’s hard to see through.

The ROG Swift OLED PG42UQ is a gaming monitor, but it might also serve well as a TV. It could also be a display for the extreme multitasker. At 41.5 inches, the display is big enough to tackle a lot of different use cases.

The screen size serves nicely for work, and it’s easy to get three tall windows side by side with tons of information on the screen all at once.

The monitor also packs in a ton of ports to help in this capacity. It can connect to five different video sources simultaneously, and it has a four-port USB hub. Conveniently, those USB ports are spread out between the top, side, and bottom of the monitor, providing flexibility in how you plug in. There’s a tripod socket on top of the monitor, too, to make assembling a high-quality streaming setup that much easier.

The OLED panel on the ROG Swift OLED PG42UQ might be able to hit some impressive brightness levels, but it can only do it for a small portion of the screen at a time. To prevent burn-in, it simply doesn’t push all of its pixels to their peak brightness all at the same time.

This is where the Auto Brightness Limiter (ABL) comes in, preventing too much of the display from getting too bright at once. In many cases, this is no distraction at all, with it almost never coming to my attention while watching video content.

But, it comes up a ton while using the monitor for everyday work and far more often than I’d like while gaming. With Word documents open, the display has to contend with a large section of bright white screen, and it quickly dials back the brightness. This can be distracting and sometimes the display dims the windows to hard-to-see levels if HDR is turned on.

Asus has a workaround with its “Uniform Brightness” mode, which sets a low, comfortable level for white to peak around (about 120 nits). At this level, the display can happily handle a full white display, so it won’t show the distracting dimming. But it’s a big trade-off, as non-OLED monitors don’t deal with this issue at all, happy to push their full display to its peak brightness level at any time.

While some monitors work perfectly out of the box, getting the ROG Swift OLED PG42UQ set up is an effort from the very start. Not only because of its size, but because of the technology involved. For starters, it comes locked into an Eco mode that effectively restricts most adjustments. Even volume controls for the built-in speakers are disabled.

Disabling the Eco mode and switching to the standard power mode opens up these options, which is key for getting a good picture. However, because of the ABL, it’s an uphill battle. Trying to take measurements on this monitor was a monstrous task, as the full-screen visuals aren’t always an accurate representation of how they’d appear on just a small section of the display.

This was no more apparent than when measuring the gray ramp of the display. In the test, the display goes from black to white in small steps. But, at a certain point, the display just simply won’t get brighter in a full-screen window. I can even plainly see it get dimmer toward the end of the test instead of brighter. This makes for a skewed measurement. Retesting with the display shrunk down (using the monitor’s built-in Aspect Control, a fussy feature in and of itself), I saw a substantially improved gray ramp.

Not knowing how the display will react from one image to the next just about rules the ROG Swift OLED PG42UQ out for any work where accurate color is essential, which is a shame because the display has a large color gamut and should be accurate with an average color variance below a delta-E of 2, even coming pre-calibrated. But, no matter how I tweaked my testing, I couldn’t get measurements that backed up this performance.

I’ll also briefly mention color fringing, which can see colors appear where there shouldn’t be any or where they should be different. This was present on the monitor and is a common issue for OLED displays because of their subpixel layout. It’s most common on text, and thin lines or hard borders between colors. I was able to almost completely eradicate it through the use of the Better ClearType Tuner. But it would still show on the edges of yellow and magenta, albeit faintly.

There’s no way around it. This monitor is huge; 41.5 inches is about as small as you’re going to find a standalone OLED monitor. That is, without dipping into the tiny, portable monitor market or going for an extremely pricey professional monitor meant for design work. It’s a lot tamer than earlier OLED options, which ranged from 48 inches to 55 inches, but it’s still going to dominate a desk.

This can make setting it up a headache, and accessing ports is much harder than on a monitor that you can simply turn around on its stand. It’s impressive that Asus kept the ROG Swift OLED PG42UQ from taking up too much space depth-wise, as the stand the monitor sits on reaches only slightly forward. It’s well balanced, and even has a small range of vertical tilt adjustments. But it doesn’t leave a lot of room for much else on a desk beyond a keyboard and mouse.

For all its fuss, the ROG Swift OLED PG42UQ is still a gorgeous monitor. Tweaking settings can help get past some of the glaring issues, and most content doesn’t see troublesome Auto Brightness Limiter actually come into play. As long as you’re willing to put in the work, it proves a great display for work and play alike.

While it won’t be for everyone, there’s a strong enough case for putting the ROG Swift OLED PG42UQ on your desk, as you can get a lot out of it if you put in the work.

Mark Knapp has covered tech for most of the past decade, keeping readers up to speed on the latest developments and going hands-on with everything from phones and computers to e-bikes and drones to separate the marketing from the reality. Catch him on Twitter at @Techn0Mark or on Reviewed, IGN, TechRadar, T3, PCMag, and Business Insider.