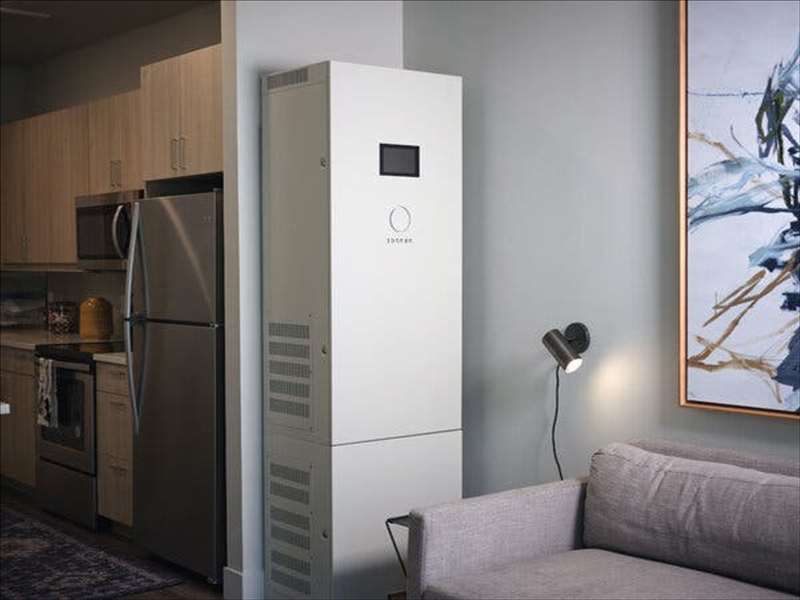 Charged via rooftop solar panels, the cells form a network that provides a building with backup electricity and that utilities can tap during peak periods.

But the feature that sealed the deal for Maik Kannenberg, a sales representative for a local tech firm, was a sleek, silent device: an energy storage battery.

Mr. Kannenberg’s home, like every apartment in the $156 million, 600-unit complex, includes a new ecoLinx battery made by the German company Sonnen. Charged via rooftop solar panels, these cells, roughly the size of a water heater, collectively form what’s called a virtual power plant. The system not only provides 12.6 megawatt-hours of backup power for the building, it also makes better use of the renewable power generated on site.

“If I can do a small part to make the world a better place, and make Utah a cleaner place, I’m happy to do it,” Mr. Kannenberg, 38, said.

Batteries have commercial applications for all types of buildings, including those at many universities and corporate campuses, said CR Herro, vice president of innovation for the national homebuilder Meritage Homes.

“In the ’80s, people installed solar because they cared about doing the right thing,” he said. “Now, solar and battery systems like the one at Soleil are like putting an A.T.M. in your kitchen that spits out $20 every month.”

As more drivers switch to electric cars, property owners could increasingly see value in generating and storing energy, especially at sites where dozens of cars may need to be charged at the same time.

In Utah, Soleil Lofts signed a first-of-its-kind deal with Rocky Mountain Power, which can tap the batteries as a power source. This arrangement helps the utility save generating costs while helping the developer save money, according to the Wasatch Group, the Utah developer that built and manages the apartments.

Wasatch executives see the virtual power plant as proof that batteries are a smart investment for building owners.

“The V.P.P. provides an income stream and makes this a more attractive property to rent,” said Ryan Peterson, president of Wasatch Guaranty Capital, the firm’s real estate and investment unit. “One of the reasons we’re looking at renewables and solar is that it reduces operating expenses and increases cash flow, a big deal to real estate owners.”

“We are at a turning point,” said Mark Dyson, a clean-energy expert at RMI, a Colorado organization focused on sustainability. “Since price points have come down so much, especially for batteries, I’d expect a growing fraction of new homes will incorporate these technologies. Virtual power plants are the cheapest, most valuable thing to build next for the U.S. power system.”

Electricity use in buildings waxes and wanes throughout the day. Renewables and battery storage can smooth out that cycle, storing power when use is low and then tapping it during periods of high demand, keeping electricity costs down.

“There’s a tremendous amount of value for buildings that are energy efficient, produce renewable power and store the power to discharge at the right time,” Mr. Herro said.

Meritage has seven demonstration projects across the country, including in Arizona, California, North Carolina and Texas, seeking to understand how buildings can better optimize the power grid and reduce energy costs. Mr. Herro said he believed more utilities would soon adopt such “load-shifting” rates.

Wasatch began exploring renewables years ago as a means to cut costs across its portfolio, which includes roughly 20,000 apartments in the Southwest, as well as office space, hotels and some industrial holdings. The savings from solar installations didn’t quite add up, so four years ago, the company began exploring the combination of batteries and solar. Viewing Soleil as a test project, Wasatch began collaborating with Rocky Mountain Power and Sonnen, working out the technical challenges to set up the virtual power plant.

Since the partial opening of Soleil last fall, the battery storage project has met all expectations, Mr. Peterson said. The $34 million battery system, underwritten with roughly $3.3 million in grants from Rocky Mountain Power, sells energy back to the utility to cover periods of peak energy use. Residents save roughly 30 percent to 40 percent on their energy bills, Mr. Peterson said.

Other developers have collaborated with utilities on battery storage projects. Related Companies installed a 4.8-megawatt battery at the Gateway Center in Brooklyn, turning what would have been unusable space into a storage site operated by Enel X, an energy company.

Neither company would discuss lease terms, but Luke Falk, a Related vice president, said that this kind of battery storage system could help companies like Related make money and meet sustainability goals.

Soleil’s pioneering effort showed that such projects could work, but they’re not easy to replicate. It’s a technical challenge, Mr. Comeau said, and success often requires owners, like Wasatch, that have the expertise and a role as a developer. As other utilities seek to increase renewable generation, he predicts more partnerships will be set up.

“New customers won’t need to go through all the work that Wasatch put in,” Mr. Comeau said.

Wasatch plans to expand the Soleil model. A series of six pilot programs will roll out across existing properties in California, aiming to see if older buildings can achieve the same energy and costs savings. Mr. Peterson eventually wants to offer a turnkey solution, outfitting other landlords’ properties with virtual power plants.

“We believe it can be done, and once it’s proven out, it’ll open a much bigger pathway for this model,” he said.