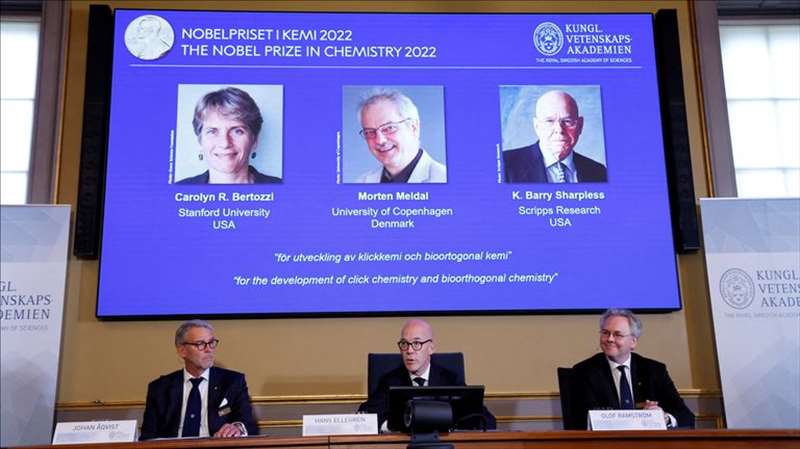 “Click chemistry” or bio-orthogonal reactions can be used to produce new cancer drugs and map DNA.

The Nobel chemistry prize has been awarded to three scientists who have developed a way of “snapping molecules together” to design new medicines.

“Click chemistry” or bio-orthogonal reactions can be used to produce new cancer drugs and map DNA.

It is the work of US scientists Carolyn R Bertozzi and K Barry Sharpless, and Morten Meldal from Denmark.

Mr Sharpless, of Scripps Research in California, won the same award in 2001 and is only the fifth person to receive a Nobel chemistry accolade twice.

Ms Bertozzi is based at Stanford University in California while Mr Meldal works at the University of Copenhagen.

Last year the chemistry prize was given to Benjamin List and David WC MacMillan for inventing a more environmentally friendly way to build molecules.

The panel said it was “already benefiting humankind greatly”.

French scientist Alain Aspect, Anton Zeilinger of Austria, and John F Clauser from the US won the Nobel physics prize on Tuesday.

They discovered that tiny particles can still have a connection even after they are separated – known as quantum entanglement, which can be used in computing and encryption.

The chemistry prize was announced at the Karolinska Institute in Stockholm on Wednesday, with the literature award due to be announced on Thursday and peace prize on Monday.