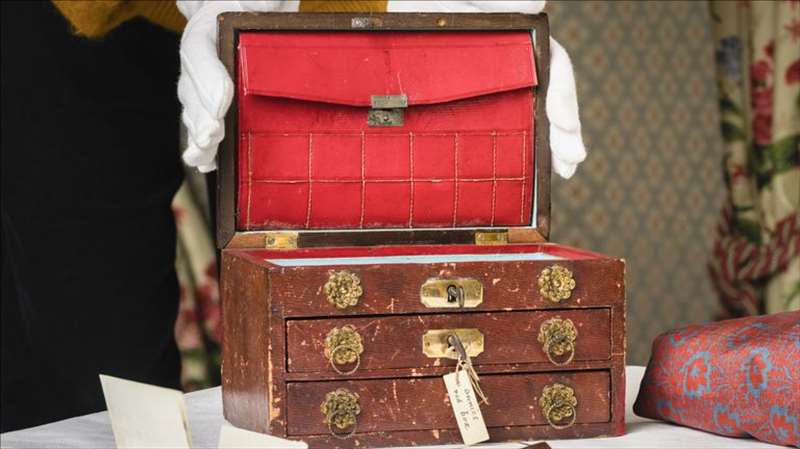 The naturalist’s daughters filled it with souvenirs, including locks of family members’ hair and his silk handkerchief.

A “treasured” keepsake box that once belonged to Charles Darwin’s daughters has been donated to English Heritage and will go on show later this year.

The Victorian red leather box contains shells gathered by Darwin on his famous Beagle voyage, where his observations fostered the ideas that led him to develop his theory of evolution.

Darwin’s descendants have donated the red leather box and its “treasures” to English Heritage, which will display the object at what was Darwin’s home – Down House, in Kent.

The naturalist and his wife Emma gave the box to their daughters, who, starting with the eldest, Annie, filled it with family mementos.

When Annie died, aged 10 in 1851, the box passed to her sister Henrietta, otherwise known as Etty.

She continued to fill it with souvenirs, including locks of hair belonging to members of the Darwin family, Darwin’s silk handkerchief and the shells.

The box has now been donated to English Heritage from the estate of Richard Darwin Keynes, the great-grandson of Charles and Emma Darwin.

Speaking on behalf of the Keynes family, Simon and Randal Keynes, Charles Darwin’s great-great-grandsons, said: “We are delighted to return this box, long treasured by Darwin’s daughter, Etty, and granddaughter, Margaret, to Down House for display among the other objects there which remind visitors of its many years as a family home.”

Darwin lived at Down House for 40 years until his death in 1882 and it was here that he wrote his ground-breaking work, On The Origin Of Species By Natural Selection, published in 1859.

English Heritage curator Olivia Fryman said: “This charming keepsake box gives us an intimate insight into Victorian habits of collecting, the life of Charles Darwin and how his scientific work and family life were intertwined.

“A treasured object, carefully preserved over the generations, the box will give visitors to Down House a valuable sense of Darwin’s work and the family who surrounded and supported him.

“We are incredibly grateful to the Keynes family for donating such a personal item.”

The donation has been announced on the 150th anniversary of the publication of Darwin’s book, The Descent Of Man And Selection In Relation To Sex (1871), in which he applied his theories of evolution to mankind.