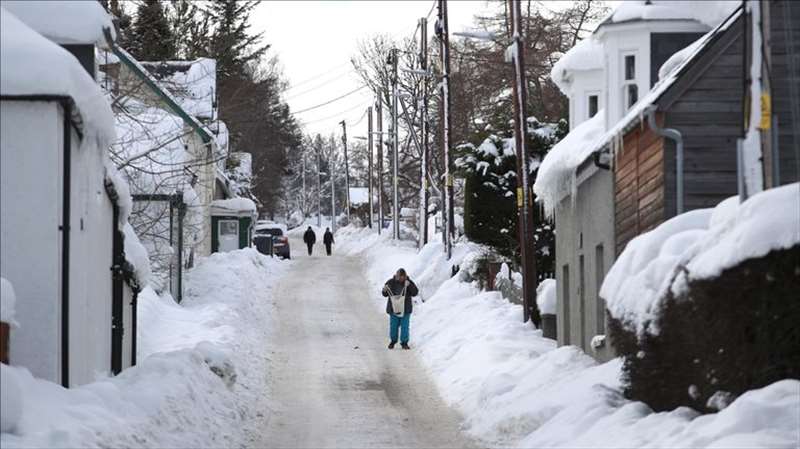 Scientists say there has been a dramatic slowdown in the flow of ocean currents that play a vital part in the world’s climate.

The Gulf Stream that helps warm the UK and northwest Europe is at its weakest in over 1,000 years and could lead to more “extreme and intense” winters, according to researchers.

They say the slowdown observed in the 20th century is “unprecedented” and likely connected to climate change.

The Gulf Stream is part of a larger “conveyer belt” of ocean currents known as Atlantic Meridional Overturning Circulation (AMOC) and carries warm water from the tip of Florida towards Europe.

Its effect ensures Britain has relatively mild winters and without it experts believe temperatures would be around 5C cooler.

AMOC helps ensure the oceans are continually mixed, with the heat and energy distributed around the globe and affecting the climate.

Scientists say it was relatively stable until a decline around 1850, followed by a more drastic dip in the mid-20th century.

The change could bring “more extreme and intense winter weather events in Europe”, a greater chance of flooding on the US east coast, and also global consequences, according to the study.

“A major mechanism for heat redistribution and crucial to the world’s climate, an abrupt slowdown of the AMOC could trigger disruptions around the globe – including a sudden rise in regional sea levels, changes in the position of major rainfall and arid climate zones,” say the research team.

The international study, which included experts from University College London, as well as Ireland and Germany, reconstructed the flow of AMOC over the last 1,600 years.

They used indicators such as proxy data from tree rings, ice cores, ocean sediments and corals, as well as historical data such as ship logs.

UCL’s Dr David Thornalley, who co-authored the study, said a slowdown in AMOC due to global warming had long been predicted but that it was “increasing evidence in support of the modern Atlantic Ocean undergoing unprecedented changes in comparison to the last millennium”.

He said marine ecosystems were already being affected. The potential flood threat to the US could come as the northward flow of AMOC, which deflects water away from the east coast, is disrupted

“As the current slows down, this effect weakens and more water can pile up at the US east coast, leading to an enhanced sea level rise,” said lead author Dr Levke Caesar, from the ICARUS Climate Research Centre and Ireland’s Maynooth University.

Climate modelling also suggests global warming could weaken the Gulf Stream by another 34-45% by 2100, according to researchers – who warn it could be a “tipping point at which the flow becomes unstable”.

The study is published in the journal Nature Geoscience .