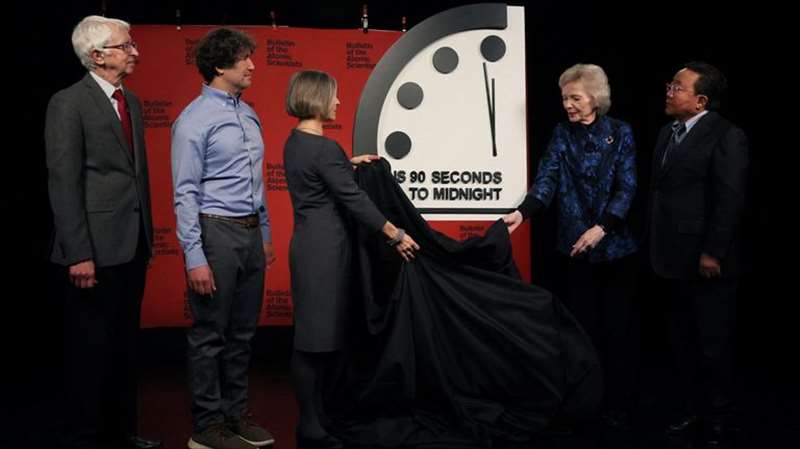 As the Doomsday Clock inches closer to midnight, Sky News looks at the meaning behind it, what it is and how it works. Created in 1947 by Albert Einstein and academics who worked on the atom bomb, experts from the Bulletin of the Atomic Scientists update it based on a range of threats.

The Doomsday Clock has inched 10 seconds closer to midnight – the closest it has ever been to a global catastrophe.

Although only a metaphor for the dangers facing humanity, the clock is updated by those in the know about a range of risks.

The countdown is agreed on by experts at the Bulletin of the Atomic Scientists.

With the increase in nuclear threat, political tensions, climate change and illnesses, experts believe that this could be a defining moment in history.

The latest update describes 2023 as “a time of unprecedented danger”.

The Bulletin of the Atomic Scientists – the creators of the clock – first launched the initiative in response to the threat of nuclear war in the 1940s.

After the US dropped atomic bombs on Hiroshima and Nagasaki at the end of the Second World War, members of the Bulletin saw a need to help the public understand the scale of the nuclear threat to the existence of humanity.

To this day, the Bulletin’s science and security board, made up of nuclear and climate experts, set the time for the clock. The board has done this since 1973, when it took over from Eugene Rabinowitch, Bulletin editor and disarmament campaigner.

The symbolism of the Doomsday Clock is powerful. If it were to strike midnight, it would mark the end of time and the theoretical point of annihilation for the human race.

The clock moves closer or further away from midnight based on how the experts on the board, plus academic colleagues and the Bulletin’s sponsors – which include 13 Nobel laureates – read threats at a particular time around the globe.

The latest update to the clock is the most dire since its inception.

The statement added: “The possibility that the conflict could spin out of anyone’s control remains high.”

The scientists said the war has “increased the risk of nuclear weapons use, raised the spectre of biological and chemical weapons use, hamstrung the world’s response to climate change, and hampered international efforts to deal with other global concerns”.

The Bulletin’s warning continued: “The invasion and annexation of Ukrainian territory have also violated international norms in ways that may embolden others to take actions that challenge previous understandings and threaten stability.

“In this time of unprecedented global danger, concerted action is required, and every second counts.”

Some say it’s an arbitrary act of scaremongering, masquerading as a more precise warning.

As Derek Thompson wrote on Tuesday: “The Doomsday Clock is so absurd. How are news organizations still treating this joke of false precision with any kind of reverence? It’s like meteorologists solemnly and humourlessly reporting the results of Groundhog Day.”

However, others were more supportive of the concept. Another Twitter user, @harryhagopian, said the new time made sense to him as he was “increasingly concerned” about global security.

When it first began in 1947, the clock was set at seven minutes to midnight.

Artist Martyl Langsdorf came up with the idea of the clock and set the time to symbolise the dangers of nuclear confrontation, on the front cover of the Bulletin.

Since then it has been ticking away as political, nuclear and climate changes continued over the years, with experts revising the time up and down – mostly closer to midnight and its metaphor for total disaster.

There have been more reassuring years, though. In 1995 the clock was at 14 minutes to midnight, the safest reading in its history.

And there were “positive strides” in some years, such as the Paris climate agreement.

Ever since 1998, however, the hands of the clock have been at less than 10 minutes to midnight.

The clock remained at 100 seconds till its latest announcement in 2023, bringing humanity 10 seconds closer to a “global catastrophe”, in the view of some scientists at least.