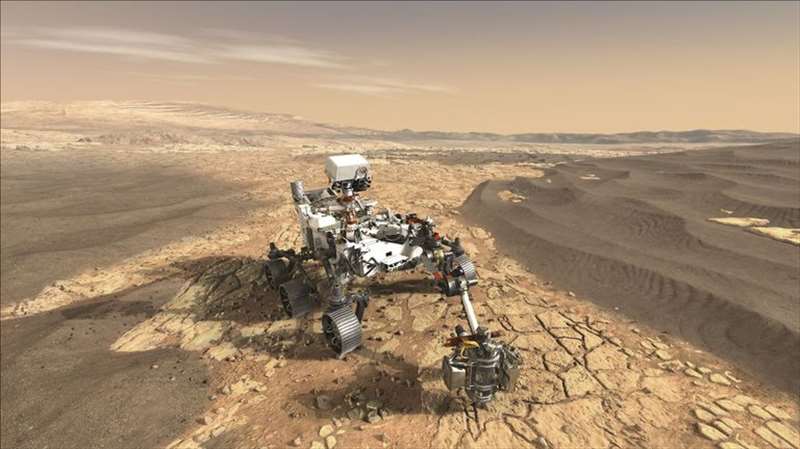 After seven months of relatively quiet space travel, NASA’s Mars mission is about to enter seven perilous minutes for its landing.

About half of all of mankind’s missions to Mars have failed, including the UK’s only attempt to visit the planet in 2003, so how has NASA prepared its Perseverance rover for Thursday?

Humanity’s first attempt to land on Mars, the Soviet Union’s Mars 2 lander, actually successfully reached the surface back in 1971, but is recorded as the first impact on Mars rather than the first landing.

The Soviet Union did manage a soft landing on Mars a few months later. Although its spacecraft started to transmit an image back to Earth, it suddenly went silent a little over a minute and a half into the transmission.

There have been a lot of hard landings in the 50 years since then, but many soft ones too.

NASA has some room for confidence – its last last failed attempt to reach the planet was the Mars Polar Lander in 1999. Since then, the space agency has had five successful missions reach the Martian surface.

Of course that’s no reason for complacency. Perseverance’s entry, descent and landing on Mars – decelerating from nearly 20,000kmph (12,500mph) to being stationary on the planet’s surface – will take just seven minutes.

As it takes 10 minutes for radio signals from Mars to reach Earth, it simply wouldn’t be possible for anyone here to remotely pilot the spacecraft, so that process is completely autonomous and controlled by systems on the spacecraft itself.

The delay also means that by the time we see Perseverance enter the Martian atmosphere – travelling fast enough to get from London to Preston within a minute – it will have already either landed or been destroyed.

So, alongside a new suite of descent cameras – which will livestream the landing back to Earth, with a 10 minute delay – and a microphone, the Perseverance rover has three key automatic technologies to land softly on the Martian surface.

These are the Range Trigger, an instrument that will precisely time the release of the parachute; a Terrain-Relative Navigation system so the rover avoids dangerous boulders or ravines; and the Advanced Aeroshell Sensor Package, that will record what the spacecraft experiences during landing.

Landing on Mars is hard enough, but getting the rover to the precise locations that are scientifically rich enough for the teams back on Earth to study is even harder.

NASA explains: “Previous rovers have landed in the general vicinity of areas targeted for study, but precious weeks and months can be used up just traveling to the location of interest.

“The Range Trigger technology reduces the size of the landing ellipse (an oval-shaped area around the landing target) by more than 50 percent, helping put the rover on the ground closer to its prime target than previously possible.

“The smaller ellipse size allows the mission team to land at some sites where a larger ellipse would be too risky, as it would include more hazards on the surface.

“That gives scientists access to more high-priority sites with environments that could have supported past microbial life.”

The value of having Mars orbiters already in space means the Perseverance mission team has a relatively up-to-date map of the landing site.

This map is stored in Perseverance’s computer “brain” which has been designed to support the Terrain-Relative Navigation system, which will – during the parachute part of its descent, take pictures of the fast-approaching surface.

NASA explains: “To figure out where it’s headed, the rover quickly compares the landmarks it sees in the images to its onboard map.

“Armed with the knowledge of where it’s headed, the rover searches another onboard map of safe landing zones to find the safest place it can reach.

“The rover can avoid dangerous ground up to about 1,100 feet (335m) in diameter, by diverting itself toward safer ground.”

During the descent for the Curiosity rover, NASA’s engineering team captured a valuable record of how the heat shield performed using something called MEDLI.

This sensor package, which stands for MSL Entry, Descent, and Landing Instrumentation, has been updated for Perseverance with MEDLI2, “a next-generation sensor suite that collects data from both the heat shield and backshell”.

NASA explains: “By measuring the temperatures and pressures the vehicle experiences, and by tracking the performance of the heat shield, the team can update their understanding of the Martian atmosphere once again.”

Once it lands, data collected later from the Perseverance rover’s weather station will give them even more insights.

“Together, this information will help them design future entry, descent, and landing systems, reducing risks to both robotic and future human missions to Mars,” the agency added.

Of course, the whole point of landing in the Jezero Crater is drilling deep down into the sediment of where an ancient river once flowed and checking for signs of life.

The carefully selected samples of Martian rock and soil won’t be analysed immediately though, but sealed in tubes and left in a well-identified place, or more than one spot, on the surface of Mars for a future mission to collect.

“Detailed maps will be provided for any future mission that might go to Mars and pick up these samples for study by scientists,” explained NASA.

The rover will also include the first test of producing oxygen from Mars’ carbon-dioxide atmosphere, paving the way for human explorers to use natural resources on Mars.

“The laws of physics may say it’s near impossible to fly on Mars, but actually flying a heavier-than-air vehicle on the red planet is much harder than that,” NASA quipped.

The little chopper underwent a series of drills simulating the mission in a testing facility in California, including a high-vibration environment to mimic how it will hold up under the launch and landing conditions, and extreme temperature swings such as those experienced on Mars.

The autonomous test helicopter will have an on-board camera and will be powered by a solar panel, but will not contain any scientific instruments.

NASA aims to develop the drone as a prototype to see if it could be worth attaching scientific sensors to similar devices in future.