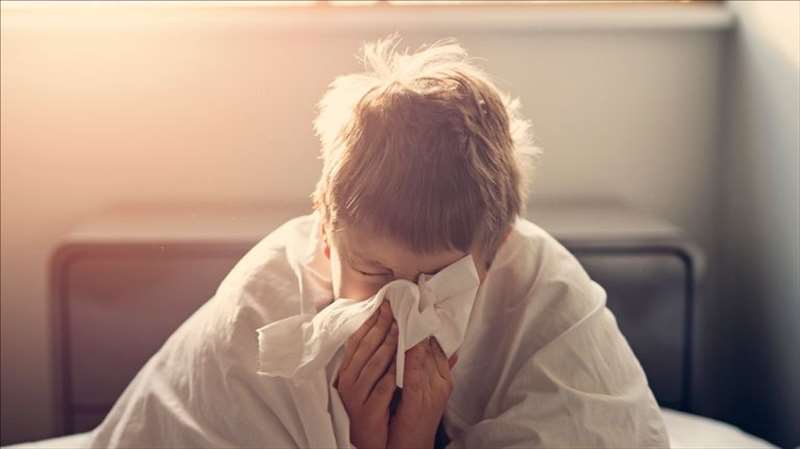 NHS leaders have warned the country is facing a “tripledemic” threat of COVID, flu and a record demand on urgent and emergency services amid pressures on staffing.

The UK could be in store for a severe flu season after Australia – which typically serves as a predictor for the northern hemisphere – suffered its worst in five years.

NHS leaders have warned the country is facing a “tripledemic” threat of COVID, flu and a record demand on urgent and emergency services amid pressures on staffing.

Influenza symptoms include a high temperature, headache, tiredness and a dry, chesty cough, along with cold-like symptoms such as a blocked or runny nose, sneezing and a sore throat.

Unlike the common cold, symptoms tend to begin more suddenly and are more severe and longer lasting.

Experts typically monitor flu cases during winter in Australia and New Zealand in order to inform predictions about the impact the virus will have when winter reaches the UK.

This year, Australia saw a rapid rise in flu cases, which started earlier than usual and reached record-high numbers.

The majority of flu cases in Australia were due to influenza A, according to the Australian health department, which is known to cause more severe epidemics.

According to an article in The Lancet, the sharp increase in infections was likely driven by a relaxation of measures put in place to combat COVID-19, such as isolation, social distancing and wearing masks.

“The Australian data provide a warning for an earlier and more severe influenza season in the northern hmisphere,” the researchers said.

The authors also said flu had not been circulating as much over the last two years, so immunity against circulating viruses was likely substantially lower than compared with previous years.

Furthermore, children younger than two – who are most at risk of severe disease, along with pregnant women – are unlikely to have ever been exposed to flu.

The UK Health Security Agency said it was particularly concerned about pregnant women and toddlers.

The authors noted flu vaccination rates had been declining in both Australia and the UK, including among pregnant women and children, who are most at risk of severe disease.

They said safety concerns and mistrust of coronavirus vaccines might have also resulted in hesitancy towards the flu vaccine.

The decision taken earlier this year to remove those aged 50-54 and 11-15 from the groups eligible for the flu vaccine should be reconsidered, they added.

Children are most responsible for flu transmission, and have the highest infection rates in Australia.

The researchers said that in order to be effective, vaccine campaigns should start early and address disparities in the vaccination of groups at high risk of infection, such as healthcare workers and children.

If the UK experiences a flu season similar to that seen in Australia, it will have to contend with two respiratory viruses circulating at high levels at the same time – putting even more pressure on the already-stretched NHS.