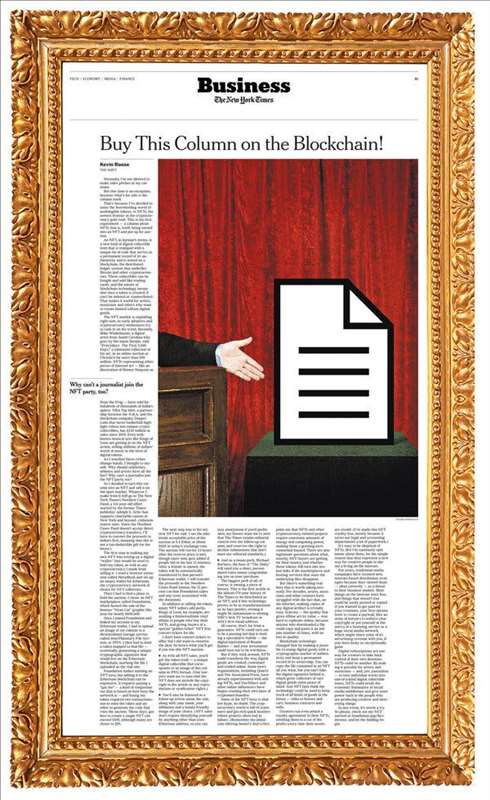 Bidders say they had many different motivations, including fun, self-promotion and signaling support for the NFT market.

I’ve had some strange experiences in my career as a journalist. But nothing even remotely prepared me for the experience of watching total strangers competing to spend hundreds of thousands of dollars for a picture of my words.

When I pitched the idea to my bosses, I thought the stunt might attract a handful of bids from curious Times readers who had spare Ethereum, the cryptocurrency being used for the auction, burning a hole in their digital wallets. Maybe we’d raise a few hundred dollars for charity and explain the complicated process of creating and selling NFTs along the way. I set the auction’s minimum price low — 0.5 ether, or about $800 — and was nervous I might not even get that much.

Instead, the auction became a circus. I listed it on Wednesday morning, and before I went to bed that night, the top bid had risen to more than $30,000. When I woke up the next morning, it was $43,000. In the final hour of the auction, I watched, slack-jawed, as a last-minute bidding war broke out.

The whole ordeal was surreal, and it raised the question: Why would anyone spend the price of a high-end Lamborghini on a picture of my words? After all, the NFT was just a cryptographic signature linked to an image of a column that anyone could read on the Times’s website, albeit with a few bonus perks. (I also stipulated that I would feature the winner’s name and photo in a follow-up column, and Michael Barbaro, the host of “The Daily,” gamely agreed to throw in a voice message for the winner.)

I reached out to @3fmusic to offer my congratulations on the purchase and to discuss the bid. They (it’s not clear if the winner is Mr. Fard or some other individual or multiple people) declined to be named — and, because of the pseudonymous nature of blockchain-based transactions, there’s no easy way for me to identify them beyond the information they volunteered — but they sent me a statement over Twitter direct message that read:

“We are already involved in art and media for a long time now,” the message read. “Our management team is always in cooperation with some highly knowledgeable and experienced art advisers who believe that we must grow with technological movements that help us to not only promote our business but also to support artists and the art market. Thus, we have proudly decided to dedicate sufficient funds and resources to invest in NFT as pioneers of this industry.”

They also gave me permission to include an image of their music studio’s logo in this column.

Jiannan Ouyang, a NFT collector who dropped out of the auction after a high bid of 290 ether (about $469,000) told me that he had decided to bid on my NFT for both personal and professional reasons. He’s a former Facebook research scientist who is now a blockchain entrepreneur, and he’s married to a journalist.

“This column reflects the thoughts we exchange daily about how the NFT technology will reshape the modern media and advertising industry,” he told me.

Some NFT collectors believe that owning early, prominent crypto tokens will eventually be like owning rare, first-edition books or priceless paintings. Mr. Ouyang admitted that the value of my NFT was “still highly speculative and subjective.” But he said that he believed that NFTs and other blockchain-based technologies would ultimately reshape the entire media landscape, allowing creators to reimagine how they create and monetize their works.

“This particular NFT from The New York Times is one of the answers and will become a historical landmark in this inevitable movement,” he said. “That’s why I think it is valuable.”

Rulton Fyder, a pseudonymous NFT artist who declined to be named, topped out at a bid of 21 ether (about $34,000). He echoed Mr. Ouyang’s thoughts that my NFT might someday have historical significance, and said that beyond the stunts, NFTs were creating a “new digital value system” that was worth taking seriously.

“People from my generation who grow up in the 1970s will love to collect first edition books, novels such as Ulysses by James Joyce,” he wrote in an email. “What crypto and NFT opened up is the ownership of the rights to say one owns such a thing, whether tangible or intangible, in a form that thousands if not millions can see and track the ownership in real time, anywhere in the world.”

André Allen Anjos, an electronic musician from Portland, Ore., who bid 5.69 ether (about $9,200) on the NFT, told me in a phone interview that bidding on the token could be seen as a symbolic gesture of thanks from the crypto community to me and The Times for, essentially, taking them seriously enough to experiment with our own token sale.

“It’s like, here’s a mainstream publication trying to interact with us as a community in an earnest and real way,” he said. “I wanted to signal, ‘Hey, this is cool, you’re asking the right questions.’”

Mr. Anjos said that he grew up in the era of Napster, when musicians first realized that the internet could destroy their livelihoods by making it free and easy to duplicate songs. Blockchain technology, he said, had changed that by making it possible to create limited-edition collectibles stamped with a digital marker of their provenance. Collecting NFTs, Mr. Anjos said, was less about owning the pieces themselves — most of which can be freely downloaded from the internet, albeit without their special cryptographic signatures — and more about signaling belief in this new model of ownership.

“I’m not going to call it a protest, but it’s a statement,” he said. “This is the crypto world trying to prove that we’re here, we care about revolutionizing this entire model, and we’re willing to put our money on it.”

Not every bidder’s motive was so high-minded. Sterling Crispin, a researcher at Apple who moonlights as an NFT artist, said he bid 4.125 ether (about $6,700) on my token because he had a virtual show coming up, and he hoped that the bid would attract some publicity.

“I was like, man, I’m about to release NFTs for this solo show,” he said. “It would be totally worth 4 ether to be featured in The New York Times.”

Neeraj Agrawal, a spokesman for a cryptocurrency think tank, said he bid 1.21 ether (about $2,000) on the NFT even though he was fairly certain he wouldn’t win, because it seemed funny. He’d thought about what image he would put in this column, if he ended up with the high bid.

“My thinking was: Maybe a photoshop of my face, or some type of super pro-Bitcoin ‘you stuck it to The New York Times’ thing,” he said.

Bidding on NFTs, he said, had become a kind of sport among cryptocurrency enthusiasts, many of whom have been sitting on huge virtual piles of Ethereum and Bitcoin for years. Every NFT auction produces a public record of bids, and high-profile auctions can attract a crowd of people just hoping to be noticed among the losers.

But Mr. Agrawal clarified that some bids are less strategic, and more about showing off.

“A lot of the NFT buyers at this high level are fabulously wealthy, and they’re just collecting for the sake of collecting,” he said.