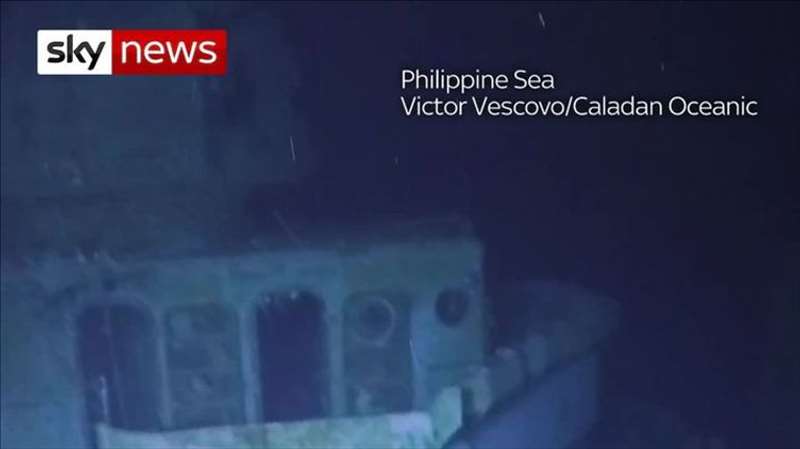 The USS Johnston was sunk on 25 October 1944, during the Second World War, in one of the largest naval battles in history.

A mission funded by two former US Navy officers has conducted the first survey of the USS Johnston, the world’s deepest known shipwreck.

Destroyer USS Johnston was sunk on 25 October 1944 during what some consider to be the largest naval battle in history, sinking 6.5km (4 miles) to the bottom of the Philippine Sea in the Pacific Ocean. It was only located in 2019.

Now, a company called Caladan Oceanic has used a hand-piloted submersible craft to re-locate, survey and film the Second World War shipwreck for the first time in a series of dives.

When the USS Johnston was commissioned its captain, Commander Ernest Evans – a man from Oklahoma with three Native American grandparents – told his crew he would “never run from a fight” and that “anyone who did not want to go in harm’s way, had better get off now”. None of his crew did so.

When it was intact the USS Johnston measured 115m long (374ft) but by the time it was discovered in 2019 the ship lay in several pieces.

A remotely-operated vehicle was able to film parts of the ship, but a significant portion of wreckage was too deep for the underwater drone to inspect.

Caladan Oceanic’s submersible faced no such limitations on its operating depth, and can hold two passengers to inspect wrecks and other deep-sea items of interest.

The hull number, 557, is clearly visible in the footage they captured.

The team performed several journeys to locate the wreck in the Philippine Sea.

When it was found, Victor Vescovo – the pilot – brought either engineer Shane Eigler or naval historian Parks Stephenson with him to survey the destroyer.

Mr Vescovo is a retired US Navy Commander, while Mr Sephenson was formerly a Lieutenant Commander in the US Navy. Mr Eigler is a submarine technician.

Caladan Oceanic says the wreck was considerably harder to find than the RMS Titanic, in water 62% deeper, but also much smaller as a vessel – approximately 43% the length and just 5% of the total displacement or overall size of the Titanic.

Mr Vescovo says he has ongoing discussions with Navy Heritage and History Command about investigating the wreck, not just in terms of its preservation but also in terms of respecting the resting place for many of its crew.

Of the 327 men who crewed the ship, only 141 survived the battle off Philippine island Samar.

Mr Vescovo said: “We have a strict ‘look, don’t touch’ policy but we collect a lot of material that is very useful to historians and naval archivists. I believe it is important work, which is why I fund it privately and we deliver the material to the Navy pro-bono.”

“The wreck of Johnston is a hallowed site,” said Rear Admiral Samuel Cox, director at the Naval History and Heritage Command.

“I deeply appreciate that Commander Vescovo and his team exhibited such great care and respect during the survey of the ship, the lasting resting place of her valiant crew,” he added, noting that three other ships lost in the battle have yet to be found.