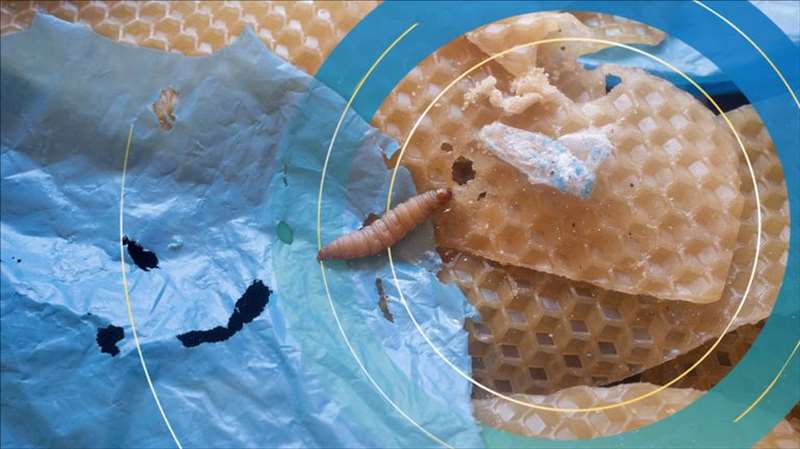 Enzymes in the saliva of the wax worm have been found to speed up the time it takes polyethylene to degrade from decades to a matter of hours.

A worm could be the answer to solving the problem of what to do about one of the commonest forms of plastic pollution.

Spanish researchers have found that chemicals in the saliva of the wax worm can break down polyethylene, a particularly hard-wearing material.

Wax worms, the larvae of the wax moth, usually feed on the tough wax bees use to make honeycombs and are actually considered pests by beekeepers.

The study, published in the journal Nature Communications, discovered that two enzymes in the worm’s saliva – which it uses to break down the wax – also break down the plastic.

For plastic to degrade, oxygen needs to penetrate the plastic’s molecules, known as polymers, a process known as oxidation.

The research found that the enzymes in the saliva caused this process to occur in a matter of hours without any need to pre-treat the plastic by exposing it to heat or radiation.

First created in 1933, it is inexpensive, hard wearing and doesn’t interact with food, making it widely used.

Specifically designed to be hard to break down, it can remain intact for decades.

However, this breakthrough could be set to change that with molecular biologist Federica Bertocchini of the Spanish National Research Council (CSIC), who led the study, saying it was “changing the paradigm of plastic biodegradation”.

She went on to explain that they had not only found out which enzymes break down the plastic, but had also managed to produce them synthetically, avoiding the need to use billions of wax worms to do the job.

Doing it that way would have several practical drawbacks and would also generate a large amount of carbon dioxide as the worms metabolise the polyethylene.

Plastic use has skyrocketed over the past 30 years, with hundreds of millions of tons ending up as waste every year, and less than 10% of that being recycled.

In March this year, the United Nations approved a landmark agreement to create the world’s first global plastic pollution treaty after talks in Nairobi, with the goal of having a legally binding deal finalised by 2024.